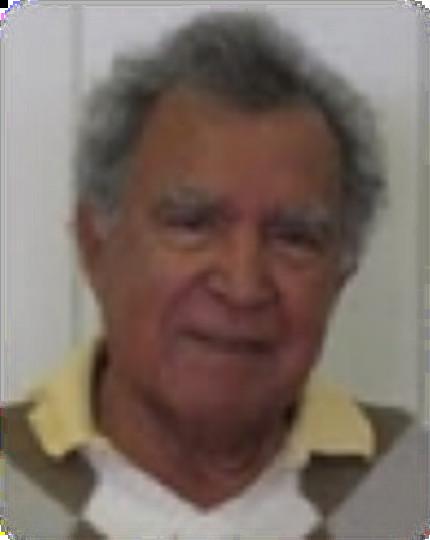 Dr. Rudy Ramirez, DPM, died, Wednesday, June 9, 2011 suddenly of heart failure at his home in Temecula after a day of gardening and golf.Of Native American ancestry, Rudy was born in Cucamonga, California, to Esteban Ramirez and Eliza Daniels. He grew up in Compton and graduated from Cathedral High School before joining the U.S. Army toward the end of the Second World War. He worked at USC County General Hospital where he met his wife, Patricia Reibling. They married in 1950 and started a family while he completed his medical training as a Podiatrist. His successful private practice of over fifty years included trips to Mexico City where he demonstrated the latest surgical procedures for the Podiatric community.His family of five were raised in Woodland Hills and enjoyed camping trips to the High Sierras, road trips to central Mexico, and adventures with the Boy Scouts. He loved golfing, gardening, and spending time with his freinds and family; the dinner table was always lively and guests from around the world found a place in his home. He loved life and people and travelled the world with his wife Patricia; he was a Scoutmaster, a member of the Lions Club, the Order of the Alhambra and the Knights of Columbus. Rudy is preceded in death by his Patricia, his wife of 56 years, and his son Stephen. He is survived by his sons Bob and Richard, his daughters Mary and Ann, his grandchildren Eric and Thomas Ramirez, Brandon Reese, Katelyn Portelli, Sarah and Taylor Busby, Daniel and Gabriel Ramirez, and his great granddaughter Olivia Ramirez.He was a happy man who lived a full life until the very end and was loved and admired by all who knew him.A Vigil Rosary will be held at England Family Mortuary in Temecula at 6:00 PM Tueday, June 13. A funeral Mass will be held at St. Catherine of Alexandria Catholic Church in Temecula on Tuesday, June 14 at 10:00 AM follwed by 12:15 P.M. internment at Riverside National Cemetery. Visitations: 6:00PM on Monday, June 13th, 2011 Services: 6:00PM at England Family Mortuary on Monday, June 13th, 2011 (map/driving directions) 10:00AM at St. Catherine's Catholic Church on Tuesday, June 14th, 2011 (map/driving directions) Cemetery: Riverside National Cemetery 22495 Van Buren Blvd Riverside, CA 92518 (map/driving directions)