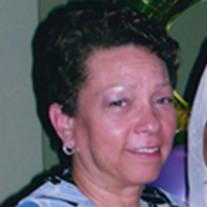 On April 3rd, 1954, a beautiful baby girl was born to John Fells and Louise Wheeler at Memorial Hospital in Queens, NY. They named her Bonita Doretha Fells. Born and raised in New York, she grew up with two older brothers, Jonathan and Gene Fells, and as a younger sister she always tried to keep up with her brothers. From Queens, Bonita and her family moved to Westbury, NY, where she recieved her diploma from Westbury High School. She continued her education at Fisk University in Nashville, TN for two years and later completed her junior and senior years at Hofstra University in Hempstead NY, where she recieved her Bachelor of Science in Education. Bonita's passion could be found in the spirit of a jazz solo, the essence of an orchestra, the carefree rhythms of a calypso beat, or any other form of music for that matter. She loved music, especially playing, and her instruments of choice were the piano and organ. Her music career started when she was old enough to travel to different gigs with her brothers, as she was the accompaniest in their jazz band. She later became the Assistant Directior of the Select Choir at Westbury High School and toured with them across Europe as accompanist. After that, she became a music teacher for grades 6-12 in the Hempstead public school system in New York. She also sang and played for various other companies and performances, sharing her love for music with everyone who listened. Eventually Bonita was led to the state of California where she met Joel George Campbell. Captivated by her beauty, he bought her a piano after learning of her talent. When she sat down to play for him, the wondrous sounds that flowed from her hands further charmed and delighted his spirit, solidifying his feelings for her. On October 6th, 1984, they were married. Their song continued with the birth of their oldest daughter, Joelle Louise Campbell a year later, and then with their youngest daughter Andrea Lauren Campbell a year after that. They made their home in Widomar, CA, and though Bonita had been playing in sanctuaries since their birth, she found their church home with Imani Temple of Temecula. Here is where Bonita continued to grow in the Lord along with her husband, daughters, and brothers and sisters in Christ, as the head musician for the church. She worshiped the Lord through music with Imani for more than 10 years, playing almost every service. Bonita was an amazing woman, with an unfaltering spirit. A great capacity for love, an uplifting smile , a golden sense of humor, and a keen intellect are only a fraction of the many characteristics she possessed. She was and is loved by all who knew her. She is survived by her husband Joel Campbell, her daughters Joelle Campbell and Andrea Campbell, her brothers Jonathan Fells and Gene Fells, her son-in-law Liberty Mabena, her step-son Desi Campbell, her step-daughter Lawanda Mitchell, and a host of other grandchildren, cousins, step-children, family members and dear friends. Her music, Her song, Will never be gone But instead, through Him Will forever live on Through family and friends, and the loved they shared, Her spirit remains, I feel it everywhere Her song still plays. --With Love, Joelle Louise Campbell