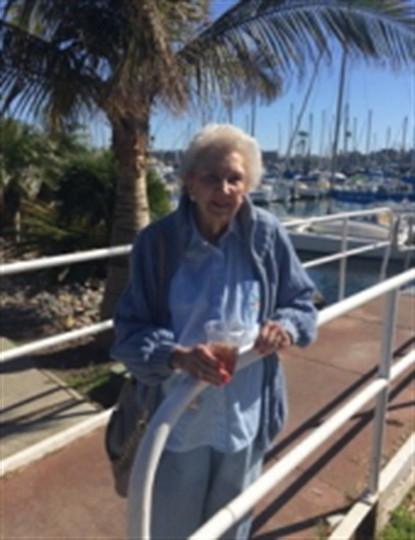 Carolyn Jean Clark was born in Shelby, Iowa, on September 4, 1922, to Okey and Esther Clark. She had two older sisters, Doris and Virginia. The family moved to Des Moines, Iowa in 1935, where Carolyn attended Roosevelt High School and then Iowa State College. Soon after, an adventurous Carolyn and a close friend decided to move to Los Angeles, California. She was employed at Title Insurance and it was during this time that she met David Franklin Cox, Jr. They were married on March 24, 1953 in Des Moines. They enjoyed a short honeymoon and then Dave, who was in the US Navy, was stationed at Guantanamo, Cuba. After Dave’s discharge from the Navy, he and Carolyn moved to Glendale, California. A few years later they bought a home and settled down in LaMirada, where they lived for 34 years. They adopted and raised two children, David Cox III, and Dori Lynn Cox (Newsom). Carolyn and Dave felt extremely blessed to be grandparents to David and Patti’s children, Katrina and David IV, and Dori and Rick’s children, Nicholas and Jenna. In 1990, Carolyn and Dave moved to Murrieta, California, where they enjoyed many years traveling with friends and attending Rancho Community Church. Among the great joys in Carolyn’s life were her husband Dave, of more than 60 years, her children and her grandchildren. Her hobbies included traveling, playing tennis, women’s Bible studies and spending time with friends. Carolyn’s strong faith in Christ stands out to all who knew her and though she will be greatly missed, we are assured that she is with her Lord Jesus Christ, and with Dave, the love of her life.