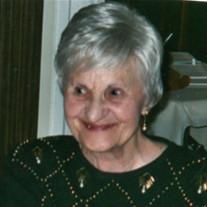 Freda Glines was born in Boston, Massachusetts. Her parents were Greek and had immigrated to the United States from Turkey prior to her birth. Freda had three siblings, two older sisters and one older brother. She graduated from high school in 1946 - the first to graduate high school in her family! She pursued a career as a bookkeeper. In 1951 she met Ralph, her future husband. They were married in July of that year and settled in Virginia Beach where Ralph was stationed in the Navy. When Ralph was discharged from the Navy, they moved to Michigan to be close to family, and later relocated to New York City where their daughter, Marie, was born. A year later they moved to sunny Southern California which offered great opportunities. Their second daughter, Cheryl, was born two years later and California proved to be the perfect place to raise their family. They purchased a home and settled down as Freda spent the next years of her life raising her daughters while enjoying such hobbies as cake decorating, sewing, upholstering, and making Greek foods. Once her daughters were raised, Freda became a bilingual teacher's assistant for 10 years. She thoroughly loved working with kids and would have never retired, but Ralph was ready, so they retired to the mountains of Prescott, AZ, and fulfilled their dream of building their own home. During this period, five grandchildren were added to their family in 7 years! Her grandchildren were the delight of Freda's life. After about 10 years in Prescott, Freda missed her kids and grandkids too much so back to California they came. They built another home and settled in Wildomar for the remainder of Freda's life. She died on Tuesday, September 29, 2009, at the age of 81, and is survived by her husband of 58 years, Ralph; daughters Marie (and her husband Mathew) and Cheryl (and her husband Spiriano). The five grandchildren who were the delight of her life are: Christen, Travis, Cassandra, Daniel, and Catherine. A memorial celebration of her life will be held at England Family Chapel on Friday, October 2, at 3:00. Burial will be at Riverside National Cemetery on Monday, October 5, at 10:00am.