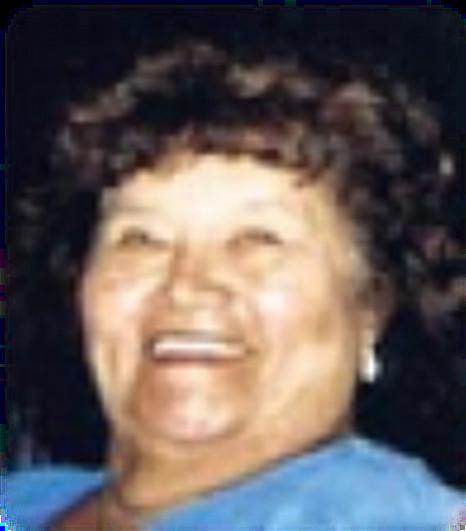 GERMAINE BEATRICE (Pico) ARENAS December 11, 1931 - September 29, 2013 Pechanga tribal elder, Germaine Pico Arenas passed away quietly Sunday, September 29, 2013. Born to the Pico family in their home on 7th Street in Perris, CA on December 11, 1931. Germaine grew up and attended school in Perris in the 1930's and 1940's throughout the peak of the Depression. The Pico family home was known for having a great garden. Germaine once said, 'Gardening during the Depression and WWII was serious business; what you grew is what you ate or you didn't eat.' As the eldest child, Germaine helped to provide for her siblings, regularly collecting the kindling that was necessary to cook a meal on the wood stove. Germaine first drove at age 9 and continued her love for traveling throughout the western United States. As a young woman, Germaine was known for her incredible beauty and voice, often performing at schools. Always a hard worker Germaine held several jobs in the 'Potato Sheds' throughout Perris, Nuevo, Lakeview and surrounding areas. She would often work two jobs to provide for special occasions. Once she took a job as a taxi driver at night to pay for her daughter's formal dress. Later in life she proudly purchased and founded farming and agricultural operations in California and Idaho. Germaine, as a member of the Pico family, was honored in 2010 by the city of Perris and County of Riverside as a member of a local Pioneer family. Germaine had one child, Christine, who she primarily raised as a single parent. She taught her daughter the importance of family, hard work, and being involved in her tribal community. And from those teachings Christine passed those principles onto her four children. Germaine was a loving and caring mother and grandmother. She was active and present in her family's everyday life. She routinely volunteered to take her grandchildren to their activities and transport them to school. The car rides were never boring because she had great stories and would rock out to her favorite music. Music was a huge part of her life, she loved the music from the 1960's and 1970's. Some of her favorite artists included Al Green, Ella Fitzgerald, Marvin Gay, and George Harrison. Germaine was a devoted catholic and was known to say the rosary every night before bed. She constantly prayed for her family, friends, and those who were less fortunate. She taught her grandchildren about the many catholic saints and the lessons that can be learned from them. Germaine chose to give to various Native American charities and in general to people in need. Germaine was an enrolled member of the Pechanga Band of Luiseno Mission Indians having served in many elected capacities for the Tribe. In 1998 she began her tenure as a Pechanga Cultural Committee Member. She then served as Chairwoman of the Cultural Committee in 2001. Under Germaine's leadership the Committee provided oversight for some culturally inaccurate artwork and designs, being placed in and around Pechanga Resort and Casino. Germaine championed the preservation of our Ancestor's village features such as rock art, kitchens, and especially the everyday tools. About these artifacts she said often: 'they deserve to be shown in a museum to our kids and our neighbors.' Beyond her hope to protect cultural resources, Germaine's Committee pushed to establish a professional training program for Pechanga Tribal Site Monitors and the Pechanga Traditional Knowledge Summer Youth Program. She relied on her common sense, her humility, and especially her devout faith to determine the best course of action for Pechanga Cultural Resources. When the new Pechanga Cultural Facility opened in 2008 Germaine said: 'we are grateful to the people of Pechanga for their assistance in the creation of our new Cultural buildingthis will continue cultural tradition as Luiseño people and our vision for future generations.' In 2012, Germaine was recognized by the Pechanga Band as a Tribal Elder for her contributions to Pechanga including the Tribal Council. Germaine was an active tribal member, especially in meetings during heated discussions. She was viewed as a wise elder with common sense and her comments always ended with 'Well that's all I have to say about that!' Germaine had lived a simple life and always wanted us to remember where she came from. Her generosity, kindness and devotion to family and friends will be greatly missed. Germaine was preceded in death by her daughter, Christine Dolores Luker; mother, Evelyn Clarice Pico; Father, Carlos J. Pico; Brothers Gabriel Pico and Norman Pico; husband, Richard Arenas. And is survived by her sisters, Marie Russell and Milless Shores; grandchildren Marc, Amy, Jonathan and Morgan; great grandchildren Andrew, Joseph, Matthew, Jeremy, Kathryn, Emily, 'Iolani and Poliahu. Visitation will be held on Monday, October 14, 2013 from 5:00 p.m. to 8:00 p.m. at the England Funeral Home, 27135 Madison Ave. Temecula, CA 92590. Funeral Mass will be celebrated on Tuesday, October 15, 2013 at 10:00 a.m. at St. Martha's Catholic Church, 37200 Whitewood Drive, Murrieta, CA. Interment will follow at Perris Valley Cemetery, 915 N. Perris Blvd., Perris, CA. - See more at: http://www.legacy.com/obituaries/pe/obituary.aspx?n=germaine-beatrice-arenas-pico&pid=167481715&fhid=7634#sthash.hMToJGDr.dpuf