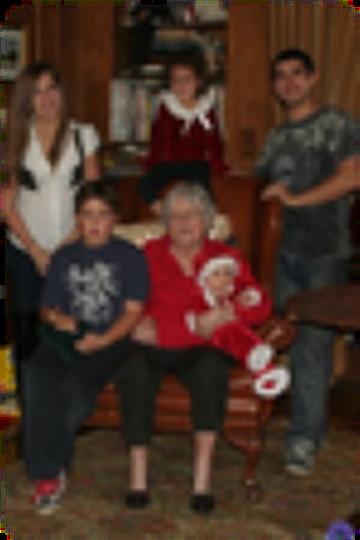 Marilyn Jean Johnson January 9, 1933 – Lynn passed away on Sunday, April 22, 2012 surrounded by her loving family in Temecula, California where she lived with her daughter, Michelle and family. Lynn was born January 9, 1933 in Schenectady, New York to Joseph Pitts and Isabel Gladu (Pitts). She was the only daughter and had two wonderful brothers, Joseph and Robert (both of who predeceased her). Lynn grew up in a two story house next to her grandfather’s bakery. Her grandparents, Joseph Pitts (who came to America from Germany) and Mary Sullivan (who came to America from Ireland) lived downstairs in their house. Lynn’s grandmother, Maryjane Gladu (the French Connection), would come to stay with them in this house, and later moved in when they moved to a larger house – Lynn thought this was great! Lynn grew up working in the bakery and helped to do everything from baking and decorating beautiful wedding cakes to cooking Turkeys for people on Thanksgiving. Lynn met her loving husband, Norm Johnson, through his sister and her classmate, Trixie. They were married on September 1st, 1962. They had their first 2 children, Jeffrey Paul and Mark Joseph in Schenectady, NY, then moved to Connecticut and had Michelle Anne. Enfield, CT was home for the family for about 18 years when Lynn and Norm became empty nesters and they became restless. The house in Enfield was not just a house, but it was a home where friends from everywhere came to visit and consider their own. Lynn loved to entertain, which she did beautifully and graciously. They met many wonderful friends that truly became part of the extended family such as Jim and Jan Hart, Elly and Artie Horowitz, Jerry and Carol Pickens, Virginia Fotos, Pat and Earl Ellis, to name just a few – there are way too many to name them all. They moved around New England a bit prior to trying out Florida, then, made their way out West to California. There were able to enjoy the sunshine, but not being too hot – just the way they both enjoyed it, and they were able to listen to live jazz as often as absolutely possible. Things Lynn loved: Her grandchildren first and fore-most – she loved to spend any second of the day with any of them. She always loved all of them equally and loved to do anything they wanted to do, Holidays (because the family was around), Jazz Music (straight ahead style), reading, crossword puzzles, movies, camping as a child, traveling with her husband, Norm, trips with the entire family, dogs, sitting outside by a firepit, dining and dancing. And, entertaining and inviting guests into their homes. She was predeceased by her loving/full-of-life husband, Norm, and is survived by her children Jeffrey (wife Carmel) Johnson, Mark (wife Ana) Johnson, and Michelle (husband Bobby) Turgeon; 5 beautiful grandchildren, Kien Johnson, Adam Johnson, Nicole Johnson, Makayla Turgeon, and Willow Turgeon, Sister-in-law Susan Pitts, and Nephews Bobby Pitts, David Pitts, and Jimmy Schrom. Lynn loved every moment with her grandchildren and wished only the best for all of them.